The Last Line, Kitesurfing in Iceland

Professional photographer Rein Rijke and professional kitesurfer Roderick Pijls have once again pushed the boundaries of adventure sports cinematography for their latest project ‘The Last Line.’

As project sponsors, we at Myend were there with them in heart, supporting them in their challenge.

The project is an initiative of Rein and Roderick, where together they search for special and extreme lakes to kitesurf. After previously surfing a poisonous hot lake in Tanzania, this time around the adventurous duo ventured to the highlands of Iceland to kite surf in volcano craters, among glacial ice floes, and down a river that ends in a waterfall.

The Movie is out now!

The camera team of Kiwi Aerial Shots followed Roderick and Rein’s Icelandic adventure on foot. Kiwi Aerial Shots are specialised in drone footage, with a proven track record in the field. The resulting movie with unimaginable imagery airs on Tuesday, May 11th, 2021! 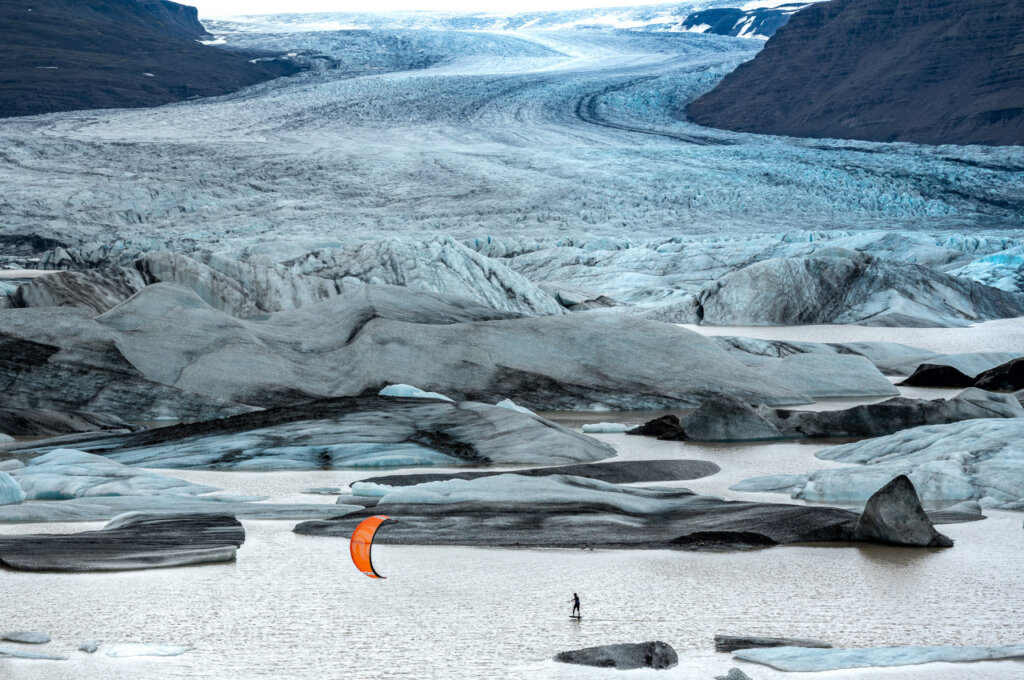 “We want to show the audience how special and beautiful our planet is.”

“It is a true experience to kitesurf in the raw Icelandic landscapes”, explains Rein. “At the same time, we all witness how nature is changing due to human influence. With the project The Last Line we travel to locations that may change drastically in the future.”

After months of preparation, Rein and Roderick traveled to Iceland in search of spectacular locations. The landscape delivered, but capturing the footage was not all that easy.

“We had to make multiple attempts to kitesurf in the volcano crater”, reported Roderick. “After we descended into the crater, the wind was extremely turbulent. We had taken this into account, but we did not expect it to rage down the crater. The strong wind went in all directions and that resulted in tough conditions. The extreme thermal diving winds and mini-tornadoes combined with the icy water and upward propelling wind made it quite a challenge”.

At their next location, Roderick surfed between large, floating chunks of ice on a lake formed by a melting glacier. The towering ice created surreal scenes as Roderick surfed in between. To top off their Iceland experience, Roderick ended the week surfing a wild river that ends in a majestic waterfall.

Unfortunately, two attempts to surf on another beautiful ice lake failed. The first time there were 120km/h winds on the mountain, and on the second attempt it was completely windless. Nevertheless, the attempts yielded beautiful scenic photos that will be shown in the movie coming out later this year.

Rein Rijke is behind the lens of Zout Photography, and is the inventor and initiator of the project The Last Line. He is a professional photographer specializing in capturing adventure sports. His work has been published in international journals, newspapers and leading magazines. In 2016, Rein reached the final of the prestigious Red Bull Illume photo competition.

Roderick belongs to the top of the kite surfing world and is therefore often found in different locations around the world. He sees nature changing everywhere due to climate change, including his home country the Netherlands. That is why he wants to make the impact of climate change visible in a unique way with The Last Line. “It is my mission to contribute to climate change. I want to show everyone what we are doing to the world. But above all, I want to show how beautiful our planet is and that we should be careful with it.”

Kiwi Aerial Shots is a The Last Line partner and sponsor. This specialized drone company has followed the duo during their Icelandic adventure from both the air and the ground.

The adventure is further supported by sponsors Protest Sportswear and Myend.

At Myend we love to help people who challenge themselves. People who aim for the stars. And every once in a while we come across a project that is so special we decide to give them even more support in the form of a sponsorship. The Last Line was one of those projects.

We have a tremendous amount of respect for (extreme) sports enthusiasts and they in turn seem to find value in our product. Having organized their will and last wishes before they go on a grand, dangerous adventure, offers them (and their loved ones) just a little bit of extra peace.

When faced with life-or-death situations, whether you got there intentionally or not, your perspective might change. That’s why the always-adaptable and always-there-on-your-phone Myend e-will is a great help to the all the risk-takers out there. Want to find out more about how Myend works? Check out all its features here or:

Let us help you plan a meaningful and memorable funeral. You will receive personal plan by email with all your wishes for safe keeps. You may want to print this and share it with your loved ones.

Organize, store, and share all the life-essential information in one place.

What is Palliative Care and Who is it For?

10 Tips for a Terminally Ill Person’s Loved Ones

Coping with a Terminal Illness Diagnosis

How to Cope with Anticipatory Grief

What is Anticipatory Grief? Cause and Symptoms

Myend is not a law firm, it does not engage in the practice of law, and it does not render any official legal advice. Therefore, you are hereby advised to seek your own legal counsel regarding any legal issues. Myend’s articles are meant to be taken as suggestions and therefore Myend carries no responsibility for the user’s actions.